A Brief History of Taplow

Taplow’s name is said to derive from Tæppa’s Hleaw, meaning Tæppa’s Mound and refers to an early 7th Century burial mound high above the east bank of the River Thames. Nearby stands Taplow Court, which until 1939 was home of lords of the manor for 300 years. It was from Taplow Court that Taplow Village gradually extended eastward to an old farmyard that became the village green in the 1960s. This is now the hub of Taplow, surrounded by St Nicolas’ Church, St Nicolas’ School, The Oak & Saw and the Village Centre which encompasses the Victorian Reading Room and the Parish Clerk’s office.

Although only a few hundred yards wide, the Parish stretches almost five miles from top to toe. To the south the ancient arable lands of Amerden are cradled in a curve of the Thames and split by the Jubilee River, a flood-relief tributary completed in 2002. Odds Farm Park and The Royal Standard sit just within the northern boundary but the once sparsely-wooded common is commanded by Cliveden, for centuries an iconic home, briefly a royal seat, and now in the care of the National Trust with a luxury hotel set in glorious grounds with fabulous views over the Thames. The Village Conservation Area sits between, just north of where the Bath Road and the Great Western Railway slice across the Parish to form an Edwardian triangle, the heart of the Riverside Conservation Area once dominated by the famous Skindles Hotel. 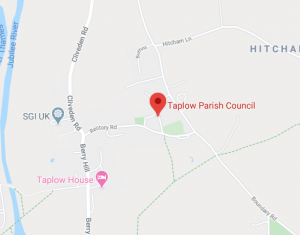